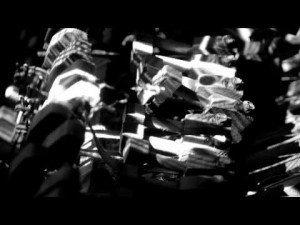 Poppy’s debut album Escapement was released in December 2012. Having first started composing through collaborations with artists, dancers, and filmmakers, she often dreamed that her first album would be accompanied by a collection of short films, animations or live dance performances. With the release of Escapement Visualised this dream has been realised.
In early 2013 Poppy met visual artist Lumen (Bristol based Tom Newell) when they were both working with HIDDEN ORCHESTRA (Tru Thoughts Records). Poppy records and tours with the band on keyboards and violin, and Lumen was creating their new audio/visual show, a multi-screen projection-mapping spectacle, using a mixture of his own original footage with innovative use of live cameras, which has drawn enthusiastic responses from audiences around the UK and Europe. Shortly after meeting they decided to work on projections for her solo live performances, which they developed together on tour and over the internet between shows, resulting in Lumen creating a series of short black and white synchronised films for all the tracks on Escapement.

Escapement was created using only sounds from the piano and violin, exploiting the sonic possibilities of these two instruments, using both conventional and unconventional techniques. The result is a delicate, intricate and unique sound world which also features field recordings of rain and birdsong, which add to the cinematic quality of the compositions. Taking a similar approach in the creation of the visuals nothing is digitally created, and the visuals are more abstract mood pieces rather than figurative story arcs. Where the track had a clear story behind it, Lumen has tried to either recreate or be sympathetic to this, in some cases visually realising some of the mental images that were there during the creation of the music. When the compositions had a more abstract feeling and mood, these were taken as starting points. Footage from filming the insides of a piano, or driving through leafy countryside, combined with the use of found footage, reflects the ideas, themes and techniques from the album, and aims to conjure up a similar dreamy nostalgia. Although each of the visual pieces are individual and independent, they are linked by a monochrome aesthetic.